“There’s no shame in fear, my father told me, what matters is how we face it.” This dark Crow stands strong within the cool, arctic blues and whites of the lone wolf image.  Wonderful image within an image. Jon’s dark garment is created out of a nice silhouette with the underlying image showing through to add textures and form.  I love the wild strokes on the wolf’s collar area forming its fur and the appearance of ice crystals.  At first glance I was captivated by the large image of the wolf, big and bright against the dark background. The flying crow naturally creates the form of the wolf’s eye slit. Beautiful symbolism showing the duality of Jon’s allegiance, to house Stark and his own brothers of The Night’s Watch. 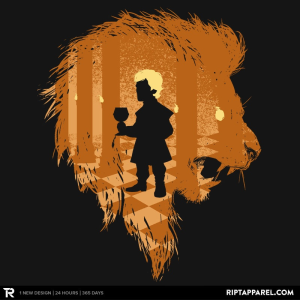 “Power resides where men believe it resides. No more and no less. . . A shadow on the wall, yet shadows can kill. And ofttimes a very small man can cast a very large shadow.” In this design, Tyrion’s figure is bold and solid black (a shadow if you will) and most of the texture lies within the lion’s head. The checkered floor serves as a wonderful way to express space and perspective. The pattern is also used as a form of ornamentation to show the lavish Red Keep of King’s Landing. The use of the bright, golden color on the wall sconces, hair, and glowing eye unifies the scene with the larger lion image. This design definitely embodies the Lannister words, Hear Me Roar.

Every (under)dog has his day. Arya Stark will have her revenge, but will she lose herself in the process? She has known many names and perhaps more: Arry, Weasel, Boy, Horseface, Lumpyhead, Cat of the Canals, the Blind Girl, Mercy. The direwolf sigil in the background suggests she remembers who she is, but for how long? With seemingly all of Westeros on her list, she marches forward with her companion, Needle. The blue, gray, and black color scheme expresses the grim events that have occurred to her family and the dark path she is on. Her facial expression is harsh, angry, and determined. Wonderful sketch-like texture used for the figure adds complexity and stress. My favorite part of this design is the text. Having the type at an angle shows perspective, depth, and works as a  path to destruction. Remember, all men must die.